From WHISPERS IN THE LOGGIA - http://whispersintheloggia.blogspot.com/

Black Church, it's been a long wait... and now, finally, it's over.

Eight years and a month since the US' 3 million African-American Catholics – a community larger than the entire Episcopal Church – last saw one of their own raised to the episcopacy, what became an increasingly frustrating "drought" for many was broken at Roman Noon as the Pope named Franciscan Fr Fernand Cheri III (above), 62, currently campus minister at Illinois' OFM-founded Quincy University, as auxiliary bishop of New Orleans.

Coming just 16 months after Bishop Shelton Fabre was promoted to Houma-Thibodeaux, the choice of his replacement didn't just arrive relatively quickly, but at a pointedly fitting time: 2015 marks the 50th anniversary of the selection of Fr Harold Perry as the Stateside church's first Black bishop of the 20th century, opening the modern era of African-American prelates. Like Fabre and the new bishop-elect, Perry – a Divine Word father who died in 1991 – was an auxiliary in the Crescent City, where Black Catholics comprise roughly a quarter of the 520,000-member archdiocese.

In December 2006, Fabre became the last African-American priest named bishop until today. In addition, this March sees the 25th anniversary of the death at 53 of Sister Thea Bowman, the Mississippi-born convert whose sparkling witness of unity and reconciliation captivated the masses, yet whose cause for beatification has long been mysteriously stalled.

A NOLA native known as "Ferd," Cheri attended the city's Notre Dame Seminary and was ordained for the archdiocese in 1978, but left his hometown clergy fourteen years later to join the "Brown Franciscans." Since entering the order, the nominee has only been assigned to New Orleans once – a 2010-11 stint as campus minister at Xavier University, where he obtained a master's from its Institute for Black Catholic Studies. The remainder of Cheri's ministry with the OFMs has likewise been in the educational apostolate. Beyond his day-to-day ministry, the bishop-elect is a board member of the National Black Catholic Congress, the Stateside church's lead organization for African-American affairs, as well as coordinator for Black Catholic ministry in the diocese of Springfield.

From his life in the archdiocese to which he now returns, Cheri is ostensibly a familiar figure to Archbishop Gregory Aymond, the Big Easy's first native son to lead its 221 year-old church, who was ordained from Notre Dame three years before his new auxiliary. Despite the drought, reports from the ground indicated that an African-American pick was believed to be Aymond's strong preference.

Notably, the appointment of an assistant comes as the exceptionally well-regarded archbishop – one of the most beloved bishops among his people on these shores – prepares to take office later this year as USCCB Secretary, the responsibilities of which require a sizable amount of time and energy to be spent immersed in conference business. In any case, as African-American, Asian and Hispanic candidates for the episcopacy are traditionally drawn from national lists due to the size of the respective talent-pools, it bears reminding that it is exceedingly rare for a non-white bishop to be a native of the place where he is appointed; like the majority of Black bishops in the modern era, however, Cheri likewise comes from a religious community. 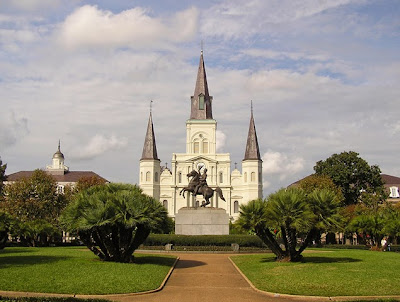 In accord with the norms of the canons, the bishop-elect must be ordained within four months. In the meantime, it will be interesting to see whether the usual Appointment Day presser brings an equally raucous reaction to the gleeful screaming that greeted Aymond's entrance into his 2009 installation, the decibel level of which memorably crashed the livefeed for some 90 seconds. (SVILUPPO: In a statement released after the news was made public in Rome, the New Orleans Chancery announced that Cheri's ordination has been scheduled for Monday, March 23rd.)

On the wider front, it's already known that Cheri's nod won't be the US' only one this week – in a very unusual release, Omaha's Catholic Voice reported Friday that Wednesday will bring the Pope's announcement of a new bishop for Nebraska's 55,000-member Grand Island diocese, where Bishop William Dendinger reached the retirement age of 75 last May. The source of the report has led to credible speculation that the choice has fallen to a priest of the Cornhusker archdiocese.

Bench-wide, four Stateside dioceses remain vacant, with – including Grand Island – another four led by (arch)bishops older than 75 and awaiting their successors.

SVILUPPO: In a brief notice of the move on his Facebook page, Aymond wrote that "our local church rejoices!!" over Cheri's selection.

For his part, meanwhile, though the new bishop-elect likely won't be heard from until the press conference, in an earlier reflection published on the website of the Black Catholic Congress – ostensibly dating to his first return to New Orleans as a Franciscan – the nominee had some searing words on race and relationships in the church:

"I am a man of unclean lips living among a people of unclean lips." I am a black priest living among black people who are broken, abused and neglected by not only society but also the church. More importantly, I have a deep desire to serve my church and my people. Like many in the Scriptures, "zeal for your house consumes me." I am passionate about serving God and making the Black Catholic Church a means of salvation for the whole church and the world, a great expectation and driving force for my ministry in the church. "A charge to keep I have, a God to glorify." But today, right before the moment the world celebrates the feast of St. Francis of Assisi, I find myself perplexed because hostility has overwhelmed the expectation of hospitality that I hoped would be the trademark of the Black Catholic community. Racism in society and the church is alive and well; to think otherwise, proves my point.

I have faced opposition where black students entering and investing their cultural gifts were met with fears and suspicions. I struggled in an oppressive social and economic system of East St. Louis gave poverty a hold new meaning. I wrestled with a Black Catholic community that rather point blame than lift a finger to serve its own children. This is not the first time that I have experienced this hostility, and, Lord knows, it will probably not be the last. This is just another reminder that it is not my kingdom; it's God's kingdom. It is not my desire, but God's will that must be done. So before I "shake the dust from my feet" and move onward to another pasture in New Orleans, I cry out "like a voice in the wilderness" - THERE MUST BE A GOD SOMEWHERE. Now do not think that I see myself like John the Baptist or even one of the prophets. No, I see myself as a slave lost in plantation quagmire, wondering if the swamps of oppressive badgering will ever surrender to the call to create "a highway for our God."

Lord knows what I as a black priest have experienced. "We have no place to send you" said to me twice as a diocesan priest in New Orleans by the personnel board of the archdiocese. "You brought all those strangers into the church" spoken to me after my first year of priestly ministry when I brought 500 new members into the church in one year. "Black priests don't read" proclaimed to me even though I had just obtained a second Masters degree. "We wanted to discredit you" angrily pronounced at my 10th anniversary of priesthood by parishioners. "Do you know how much you offend people by what you do" alleged by a black priest, later bishop, who refused to share with me who I was offending and what I was doing to offend them. "Those Cheri boys" declared by black peers in religious life about me and my brother for creating opportunities for good Black Catholic Worship. While these things are to be expected, what makes them difficult to bear is when they are said by your own people and black leaders in the church you respect and trust. Lord, have mercy!

It is good that God gave me Franciscan brothers who help me to discern God's purpose and God's design through the mire of it all. My brothers temper my anxious spirit with a brighter picture of the kingdom of God at hand. They point me to the cross and reveal its saving grace that renews my troubled heart. They call me to a bigger reality and recognize how God is making a way. I am grateful for the fraternal love that keeps us committed to the Black Catholic Community. There are still blessings to shower down upon us.

I always believe that God is preparing me. "He's preparing me for something I cannot handle right now. He's making me ready just because He cares, God cares." "I may not be all that you are. I may not be a shining star, but what I am; I thank the Lord for making me His child." Scripture says and I believe: "My son, when you come to serve the Lord, prepare yourself for trials. Be sincere of heart and steadfast, undisturbed in time of adversity. Cling to him, forsake him not; thus will your future be great, accept whatever befalls you, in crushing misfortune be patient; for, in fire gold is tested, and worthy men in the crucible of humiliation. Trust God and he will help you; make straight your ways and hope in him." (Sirach 2:1-6) I must confess that the humiliation of my slavery in service to the church and my people sometimes overshadows the joy I've found in serving the Lord; as well as it makes me appreciate the blessings rising from the shadows.

Like Jeremiah, I feel the weight of those who watch for my downfall much more than I hear the voices of those who pray for success. My grandmother was right when she said, "Child, it is because you doing something that people talk about you." Lord knows that "I have been buked and I've been scorned. I've been talked about, sure as you've been born." She also said, "When you do what is right, the devil gets busy. If you were doing nothing, the devil would not be disturbed." I really try to remember that as I continue to "not turn my back on my own" people and the church. I am troubled by the weakness of my plight. Yet I am reminded "My grace is enough for you, for in weakness, power reaches perfection." 2 Cor 12:9 "Only do what is right and to love goodness and walk humbly with your God." Micah 6:8

What bothers me most is that I've heard this before from other black priests who have gone before me. I wonder sometimes as I encourage young men to take up the mantle of priesthood after me, can this cycle of being thrown into the cistern of internalized racism, petty jealousy among peers and misdirected abuse from my own people will ever be broken? I ask myself, "Can we ever rise above the plantation mentality to see the dignity and honor of being all that we are called to be validly Black and justly Catholic?" I believe that we can rise every time I remember "Didn't my Lord deliver Daniel; then why not everyman." God chose an insignificant place and an insignificant people to be born. "For nothing is impossible with God."