Something amazing is happening......Courtesy of Whispers in the Loggia 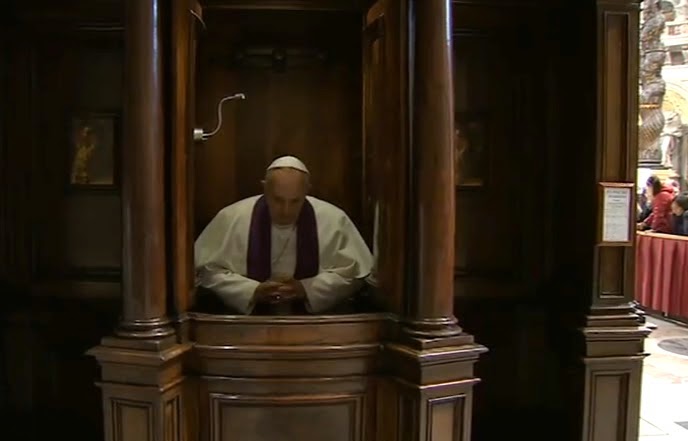 While it was already well-noted that the Pope was marking the hour of the second anniversary of his election by returning to his favorite sacrament – leading a Lenten Penance Service with individual Confessions in St Peter's – Francis upped the ante considerably moments ago with a surprise announcement of immense significance: his indiction of an "Extraordinary Holy Year of Mercy" as a moment for the entire church to spread the word of God's forgiveness, beginning on December 8th.

Set to include the opening of the basilica's Holy Door – the Jubilee ritual which normally only takes place every quarter-century – the Pope said the Year of Mercy will run until the end of November 2016. The intended opening day for the observance coincides with the 50th anniversary of the close of Vatican II.

A practice dating to 1300, while the church observes an ordinary Holy Year at the 25-year marks of each century as an equivalent to the ancient Jewish custom of jubilee – a designated time of forgiveness, renewal and celebration – the last two extraordinary Holy Years were held in 1933 and 1983, respectively marking the 1,900th and 1,950th anniversaries of Jesus' death and resurrection.

The news given under embargo to the press prior to the service, on going public with the plan from the pulpit, Francis received a spontaneous ovation from the crowd in attendance.

Following the announcement, as he did at last year's Penance rite in an unprecedented public moment for a pontiff, Francis again knelt to make his own Confession to another of the priests stationed around St Peter's (below) before receiving penitents in his own booth. 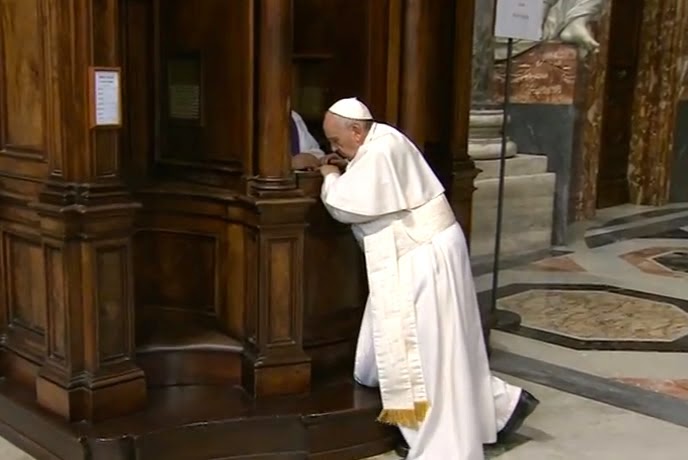 Tonight's event in the basilica marked the global opening of "24 Hours for the Lord" – the second year of a Vatican-sponsored "festival of forgiveness" which, at the Pope's direct behest, urged the dioceses of the world to provide an ample number of churches where Confession would be available around the clock to open this Fourth Weekend of Lent.

Here below, the Vatican's English translation of the Pope's homily featuring the announcement of the Holy Year (emphases original):

This year as last, as we head into of the Fourth Sunday of Lent, we are gathered to celebrate the penitential liturgy. We are united with so many Christians, who, in every part of the world, have accepted the invitation to live this moment as a sign of the goodness of the Lord. The Sacrament of Reconciliation, in fact, allows us with confidence to draw near to the Father, in order to be certain of His pardon. He really is “rich in mercy” and extends His mercy with abundance over those who turn to Him with a sincere heart.

To be here in order to experience His love, however, is first of all the fruit of His grace. As the Apostle Paul reminds us, God never ceases to show the richness of His mercy throughout the ages. The transformation of the heart that leads us to confess our sins is “God's gift”, it is “His work” (cf. Eph 2:8-10). To be touched with tenderness by His hand and shaped by His grace allows us, therefore, to approach the priest without fear for our sins, but with the certainty of being welcomed by him in the name of God, and understood notwithstanding our miseries. Coming out of the confessional, we will feel God’s strength, which restores life and returns the enthusiasm of faith.

The Gospel we have heard (cf. Lk 7:36-50) opens for us a path of hope and comfort. It is good that we should feel that same compassionate gaze of Jesus upon us, as when he perceived the sinful woman in the house of the Pharisee. In this passage two words return before us with great insistence: love and judgment.

There is the love of the sinful woman, who humbles herself before the Lord; but first there is the merciful love of Jesus for her, which pushes her to approach. Her cry of repentance and joy washes the feet of the Master, and her hair dries them with gratitude; her kisses are pure expression of her affection; and the fragrant ointment poured out with abundance attests how precious He is to her eyes. This woman’s every gesture speaks of love and expresses her desire to have an unshakeable certainty in her life: that of being forgiven. And Jesus gives this assurance: welcoming her, He demonstrates God’s love for her, just for her! Love and forgiveness are simultaneous: God forgives her much, everything, because “she loved much” (Luke 7:47); and she adores Jesus because she feels that in Him there is mercy and not condemnation. Thanks to Jesus, God casts her many sins away behind Him, He remembers them no more (cf. Is 43:25). For her, a new season now begins; she is reborn in love, to a new life.

This woman has really met the Lord. In silence, she opened her heart to Him; in pain, she showed repentance for her sins; with her tears, she appealed to the goodness of God for forgiveness. For her, there will be no judgment except that which comes from God, and this is the judgment of mercy. The protagonist of this meeting is certainly the love that goes beyond justice.

Simon the Pharisee, on the contrary, cannot find the path of love. He stands firm upon the threshold of formality. He is not capable of taking the next step to go meet Jesus, who brings him salvation. Simon limited himself to inviting Jesus to dinner, but did not really welcome Him. In his thoughts, he invokes only justice, and in so doing, he errs. His judgment on the woman distances him from the truth and does not allow him even to understand who guest is. He stopped at the surface, he was not able to look to the heart. Before Jesus’ parable and the question of which a servant would love his master most, the Pharisee answered correctly, “The one, to whom the master forgave most.” And Jesus does not fail to make him observe: “Thou hast judged rightly. (Lk 7:43)” Only when the judgment of Simon is turned toward love: then is he in the right.

The call of Jesus pushes each of us never to stop at the surface of things, especially when we are dealing with a person. We are called to look beyond, to focus on the heart to see how much generosity everyone is capable. No one can be excluded from the mercy of God; everyone knows the way to access it and the Church is the house that welcomes all and refuses no one. Its doors remain wide open, so that those who are touched by grace can find the certainty of forgiveness. The greater the sin, so much the greater must be the love that the Church expresses toward those who convert.

Dear brothers and sisters, I have often thought about how the Church might make clear its mission of being a witness to mercy. It is journey that begins with a spiritual conversion. For this reason, I have decided to call an extraordinary Jubilee that is to have the mercy of God at its center. It shall be a Holy Year of Mercy. We want to live this Year in the light of the Lord's words: “Be merciful, just as your Father is merciful. (cf. Lk 6:36)”

This Holy Year will begin on this coming Solemnity of the Immaculate Conception and will end on November 20, 2016, the Sunday dedicated to Our Lord Jesus Christ, King of the Universe – and living face of the Father’s mercy. I entrust the organization of this Jubilee to the Pontifical Council for Promotion of the New Evangelization, that [the dicastery] might animate it as a new stage in the journey of the Church on its mission to bring to every person the Gospel of mercy.

I am convinced that the whole Church will find in this Jubilee the joy needed to rediscover and make fruitful the mercy of God, with which all of us are called to give consolation to every man and woman of our time. From this moment, we entrust this Holy Year to the Mother of Mercy, that she might turn her gaze upon us and watch over our journey.